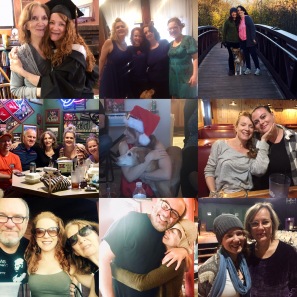 For someone who’s not a hugger by nature (who truthfully, kinda inwardly flinches when someone boldly announces “I’m a hugger!”), one of the things I miss most right now is hugging the people I love most…I’m remembering a time when I could hug those people with unabashed abandon, and in spite of the shitstorm swirling around us, I believe in a day where we will be able to hug again. I mean, if we want to.

I spent Sunday alone (was it a holiday or something?), which is how I spend every day in isolation, one day smearing (now, there’s a funny word, smear, that used to only be used behind the word “pap,” but here I am, getting all resourceful in a pandemic, finding a new use for it!) into the next. Not that it’s much different than PP (pre-pandemic—I’m also getting good at making up acronyms!), but there’s a big difference between being an introvert by nature and being forced into isolation, which is completely unnatural even for a non-hugging introvert; to say there will be significant fallout to this unnatural state is the understatement of the moment, given the way shit changes every second of every minute of every hour of every day.

I rearranged my living space (again), made a handful of t-shirt masks, scratched out

some strange, sloppy writing, about which Joe and I discussed the other night—he believes the most important art is happening now—the raw, clunky shit plunking out of keyboards or slapping onto a canvas, sometimes running uncontrollably like diarrhea, other times thick and sludgy, barely moving, if at all— who has time to edit when it’s old news by the second revision? I can agree; my writing (and drinking) career began in earnest, in the middle of a personal shit show, when every hour of every day brought new, more horrific news than the last…I’m observing so many strange parallels between that myopic experience and this pandemic one…still, I know that for many people, their creative process and a whole lotta other shit has come to a grinding halt, and I’m no expert, but I’d say that one is as common response to crisis as the other. Brené Brown talks a awful lot about this phenomenon of our reactions in crisis—some become hyper-mobilizing, others sort of implode, many of us do both on an unpredictable rotation…check her work out, if you aren’t already familiar.

The sooner we recognize that for all the funny memes going around about “The ‘Rona” and over-eating and bad hair and other trials and tribulations of self-isolating, this experience is fucking all of us up to some degree or another, the better off we’ll be in the long run. Thanks or no-thanks to social media, we can observe the multitude of responses (that change with the breeze), and I can’t help but feel some sort of strange, I don’t quite know what the word is—comfort? vindication? camaraderie? compassion and grace? fear? knowing now, that what I went through with Bob was completely fucked up, and the only, right response to witnessing something so fucked up, is to end up fucked up, for a while, maybe forever…dear John Prine was a masterstoryteller of this phenomenon…when the shitstorm finally passes, mental health workers and hairdressers will be the new front line.

I sit helpless and heartbroken because I can’t do anything for Joe and his dad, Jesse, during their sacred time in hospice; the divine way that things played out for them to be together is breathtaking, but the backdrop in which it’s happening is cruel and unusual punishment—no one can visit, hospice services have been whittled to bare essentials…one of endless secondary and tertiary effects of this virus. Thank god for Skype, FaceTime, Zoom and other video chat/meeting apps that are getting record use in this time. If we can’t hug, at least we can connect with each other in all our uninhibited, “I frankly don’t give a shit anymore—what you see is what you get” video chat glory. I’ve sent and received more real olde tyme mail these past few weeks than I’ve had in the past few decades, though I do wonder about my neighbor downstairs who gets at least 3 Amazon Prime deliveries a day. Not judging, just wondering, is all.

Spending Easter Sunday alone wasn’t all bad. I’ve got a good eight years under my belt—I think of it as a residency in grief— I’m an expert at entertaining myself, which is kind of the hilarious irony about this mess—just when I finally figured out that eight years of self-imposed exile wasn’t doing my mental health any favors and I decided to quit drinking and really get to work on some shit I’ve been neglecting for quite some time, a pandemic comes roaring across the country and shreds my newfound “I need to build community!” proclamation. Who was it that said life is what happens when you make other plans…

I was motivated to clean and rearrange by the brilliantly eclectic Spotify playlists created by genius Mix Mistress Nasty G-Spot (that’s Gretchen Hildebrandt, to the tragically unhip—I don’t think even she’s aware of her new crisis-inspired DJ handle). She created two lists—one of socially distant appropriate titles, the other of isolation no-no’s, like Exile’s Kiss you All Over and The Ramones’ You Sound Like You’re Sick. I laughed out loud as each song outdid the last: Georgia Satellites’ Keep Your Hands to Yourself, the Divinyls’ I Touch Myself, Motley Crue’s Don’t Go Away Mad (Just Go Away), Tony Orlando and Dawn’s Knock Three Times, Pink Floyd’s Comfortably Numb—curiously, almost prophetically, the 80s has an abundance of pandemic-relevant material. Leave it to Generation X…one of our new pastimes is calling or texting each other with new songs to add to her lists. Find and follow Gretchen on Spotify for a big hug from her, in the form of pure music joy for these hard times.

Yesterday afternoon, Jill R. Hildebrandt and I met halfway-ish, in Jordan; she had some Easter treats she wanted to give me, I had some t-shirt masks for her and Gretchen. We parked in the lot of the Holiday station off 169, six spots away from each other. Like a strange deal going down in broad daylight, the exchange was made: I tossed two bags of sanitized face masks out my window at her, she crept out of her car, placed her goods, bound up in a plastic shopping bag, on the pavement between us, then scurried back; I hustled out to retrieve then retreat. She held up the Ziplocks and whipped out a bottle of spray disinfectant and hosed the suckers down. We waved and snapped pictures of each other, choking up and laughing at the same time. How fucked up is everything about this, I think (a thought that plays on repeat throughout my days). We exchanged a few more words, waved and blew kisses through windows, before taking off in different directions. If you’ve been a recipient of a spee-dee delivery from this sister of mine (or a dee-lux version—a personal tap dance performance), consider it a big hug from her.

My sibs and I were able to gather for a video call on Sunday, which basically consisted of two hours of nonstop Hildebrandt kids being kids again. Our parents would have been so proud…

Someone recently said to me that she’s ready for thing to return to normal again. I’m not a scientist or economist, psychologist or historian, but I don’t think that’s gonna happen, that we’ll go back to how things were, but it’s also kind of a sanctimonious, asshole thing for me to say. In spite of what I think or what I’ve gone through, who am I to say that things will never, ever return to the way things used to be? All I have is my own experience to go by. Still, there’s evidence all around us: people are returning to their natural hair color (I just read that in eight weeks, thanks to covid-19, 80% of the world’s blondes will be extinct…look it up if you don’t believe me…), we are being forced to let go of old habits and pastimes, and discovering that they no longer serve us, if they ever did…skies ovetr cities that were tinged sepia are clearing, wildlife is returning to their habitats, people are connecting with each other in wildly creative, unprecedented ways…that’s not to say that there’s not some scary awful shit going down—there is, there’s too much to say about that, that’s why I sometimes can’t stop these posts —still, if by “going back to normal” means going back to a broken system, that those other glorious things suddenly go back to not happening again, then I’d have to say I’m kind of a proponent for rewriting the script…

I believe that when all of this is said and done, the world will be divided into two camps—huggers-bordering-on-gropers and those who run screaming when someone gets within six feet…don’t be surprised when we’re finally released from house arrest if this anti-hugger comes up to you and hugs your livin’ guts out. Stranger things have happened.